One of the busiest of São Paulo’s beaches, 87 kilometres from the capital, Guarujá is a town that is devoted to tourism and has dozens of beaches that stretch along its avenues and urban zones, or are to be found in less accessible locations. In the central area, the blue waters of the beaches of Pitangueiras and Astúrias have great appeal to the tourists. Amongst the most popular spots are the beaches of Enseada and Casado. On the open sea and not good for bathing, the Tombo beach is excellent for surfers, in contrast with tranquillity of Guaiúba, Prainha Branca and Iporanga where the fertile vegetation is enhanced by a waterfall and a freshwater swimming pool. Guarujá also has relics from history such as the Barra Grande Fortress built in the 16th century, the Forte Velho just 8 km from the centre and the Armação das Baleias, the first industrial plant set up in the state for the extraction of whale oil. The deserted beaches are located to the north, and some have condominiums and some have only access by foot or boat. It has a bike lane at the edge of Praia da Enseada, and another one connecting the beaches of Tombo and Guaiúba. But the comfort and the easy access to the city bring some problems. During summer, the large number of visitors causes water shortage and traffic congestion. 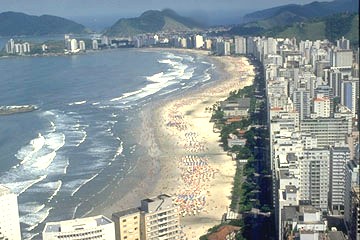 Book a Tour Package to Guarujá