Some 80 kilometers (50 miles) north of Salvador on Bahia’s Miracle Coast is the resort town/fishing village of Praia do Forte. Upon entering the village the fishing village aspect will not be immediately apparent, though it will become so when one reaches the beach at the end of the esplanade and sees the fishing boats moored out there in the water. The esplanade is a recent phenomenon, having replaced the dirt street which was the village’s principal thoroughfare until several years ago. During this transition simple houses were transformed into restaurants and crafts shops -- many of excellent quality -- and Praia do Forte has become a Bahian Carmel-by-the-Sea/ecological reserve, a place which has retained “reality” in the sense that it is not only tourists who spend time here, but Salvador residents as well. 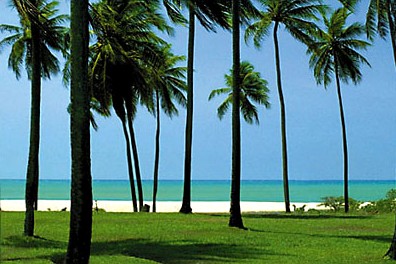 Book a Tour Package to Praia do Forte