60 km inland from Itajaí, Santa Catarina, Blumenau is a small city settled by German immigrants in the second half of the 19th century. Blumenau’s downtown has a German architectural flavor of half-timber construction with clean streets affording dining, lodging, and shopping that may make you forget you’re in South America. You’ll find German cuisine, pastries, and music throughout this town, plus a growing glassware industry with high-quality products. And to top off your visit, you’ll want to tour the Blumenau Brewery. The major tourist event is the annual Oktoberfest, which began in 1984 and brings in more then 500,000 visitors each year. The celebration spills from the festival area into downtown, with celebrants consuming almost 100,000 gallons of beer in three weeks. 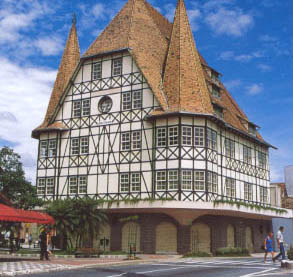 Book a Tour Package to Blumenau