Urban planner Lucio Costa, architect Oscar Niemeyer and landscape architect Burle Marx created the inland capital of Brasília, inaugurated on April 21st, 1960 by President Juscelino Kubitschek. Shaped like a plane seen from above, or bow and arrow, the city is divided into Districts. Your city tour will include the Plaza of Three Powers - the president’s Palácio do Planalto, the Palácio do Congresso and the Palácio da Justiça, the National Theater built like a pyramid, the television Tower (a 218 meter high structure), and the Plaza of Congress. 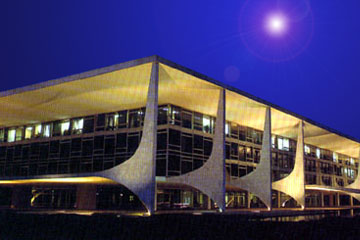 Book a Tour Package to Brasília