Far up the west side of the massive estuary of the Rio de la Plata stands one of the world’s largest Spanish speaking cities. Buenos Aires is the center of banking, culture, and intellectual life as well as the capital of Argentina. The city pulsates with enthusiasm and activity. To Porteños, as the local citizens are called, Buenos Aires is synonymous with Argentina. Nearly forty percent of the nation’s thirty-three million people live here. Visit the Plaza de Mayo with the Casa Rosada on one side and the Cathedral on the other, where soldiers will lower the flag daily, dressed as mounted grenadiers. Marvel at the city’s Parisian architecture. Enjoy the enthusiasm and activity of the nightlife in Buenos Aires, where Porteños will dance the Tango and chat in sidewalk cafés till dawn. Don’t miss the Fiesta Gaucha which offers the tourist a party at an Argentine ranch outside the city, complete with Argentine beef and wine, and display of horsemanship. 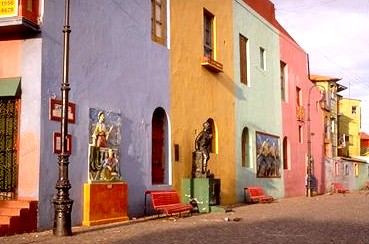