Iguassu Falls is one of the world’s most beautiful natural spectacles. The falls are formed by the Rio Iguaçu, winding west from Curitiba (the capital of the State of Paraná) some 400 miles toward the cataracts. At the falls, the river overcomes uneven ground by widening around a 3 km horseshoe-shaped ledge, and plunging into the canyon below. Most of the 275 individual falls plunge in two stages, but in the center, the river falls into the “Devil’s throat,” some 235 ft. below. Iguassu Falls are higher than Victoria Falls and Niagara Falls (180 ft. ), and more beautiful than either. In terms of volume, Iguassu is also one of the world’s largest, pouring an average of 8,000 m3 of water per second over the falls during the rainy season. This compares with Niagara’s 6,000 m3 per second. Also visit the world’s largest hydroelectric plant called Itaipú, whose 18 turbines generate 12. 6 million kw of electricity. Your tour will include a video showing the dam’s construction, and a bus ride over the dam. Notes on tour times: The Brazilian And Argentinean National Parks are closed for maintenance every Monday, from 08:00am to 01:00pm. The Itaipu Dam is open for visitors from Monday to Saturday, from 08:00 to 10:00am and 2:00 to 3:30pm except on holidays. 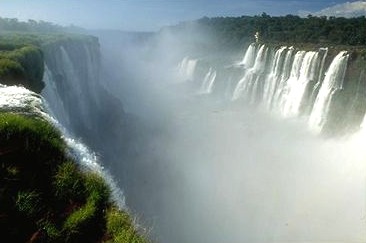 Book a Tour Package to Foz do Iguaçu