Manaus is the capital city of the State of Amazonas, and the gateway to the Amazon jungle. A major inland port (reached by oceangoing vessels from the Atlantic) Manaus is a collecting and distribution center for the river areas of the upper Amazon. Its tourist attractions are many: hunting, fishing, or trips along the rivers. The local cuisine is exotic and includes river fish, turtles and tropical fruits exclusive to this part of the world. Your city tour will include the Amazonas Theater, a silent witness to the rubber boom, the Indian Museum which houses a rich collection of Indian handicraft, the Customs House made of stone imported form Portugal, the Floating Docks, an ingenious British engineering feat designed to hold its own during river floods, and the “Meeting of the Waters” where the black waters of the Rio Negro run alongside the muddy waters of the Solimões for miles without mixing. 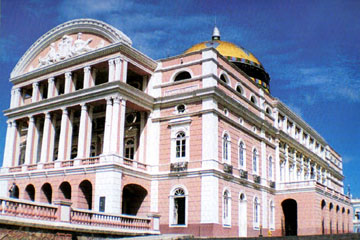 Book a Tour Package to Manaus