Situated near the easternmost point of South America where Brazil bulges into the Atlantic Ocean, Recife is closer to Africa than any other major city in the Western Hemisphere. Formerly known as Pernambuco, the city is the capital of Pernambuco State. It takes its name from the Portuguese word for “reef,” reflecting the coral formations that shelter its harbor. With a population of over 1. 4 million, Recife is the largest city in Brazil’s Northeast. Outstanding beaches lie to the north (Itamaracá), and to the south of the city (Porto de Galinhas). Olinda, just north of Recife, was declared a World Monument by Unesco. It is one of the best kept historical sites in Brazil. Elegantly perched on a hilltop, Olinda preserves all the charm of a XVII century capital. Nudged from supremacy by nearby Recife during the early 1800s, it taded into obscurity but maintained its unique character. 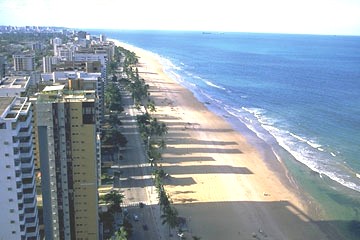 Book a Tour Package to Recife